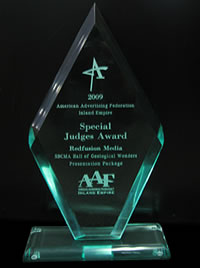 The RedFusion Media team received the coveted Judges’ Special Award. Selected from all of this year’s Gold ADDY award recipients, and judged as having best overall copywriting and art direction, the award honors the development presentation package created to promote the funding of exhibits in the new San Bernardino County Museum’s Hall of Geographical Wonders. Only one award of this kind was given this year. 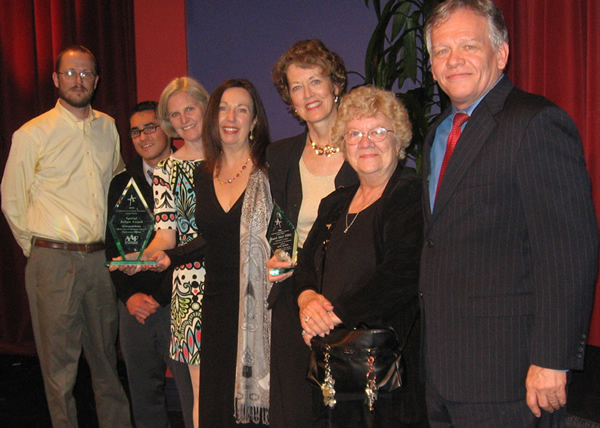 Molly Burgess, General Manager of RedFusion Media received the impressive crystal trophies on behalf of the company’s team. When interviewed about receiving the awards, Burgess stated, “We are very pleased to receive these awards, and to receive this recognition by the advertising industry for our work. We share these awards with our clients, who continue to give us the opportunity to create original solutions to fulfill their marketing needs.”

Other wins for the company include the Riverside Mission Inn website; Eagle Land and Sea website received a silver award for Flash. Webmasters and designers honored for their contribution to these websites include RedFusion Media team members Jon Burgess, Rich Rutledge, Michael Scott Burgess, Aaron Webre, and Vincent Sanchez. Also winning in the mixed media campaign for “Footsteps in Your Field,” an advertising campaign for AvoTerra™ by Index Fresh™, Inc, a leading avocado distributor, with credits to Ron Burgess, Molly Burgess, Cindy Barents, Margaret Rippetue, and Eric Shorett, Crown Printers of San Bernardino.

The annual awards event was presented by the American Advertising Federation, Inland Empire, in the first level of the three-tier competition. At the second level of the contest, local winners compete against winners from 15 other District competitions. The final tier represents the national level of the ADDY® awards. An affiliate member of the American Advertising Federation (AAF), the AAF-IE works to enhance the visibility and to support the growth of the advertising community within the Inland Empire.

RedFusion Media™ announced that the company has received a Polaris Award from the Public Relations...